Canada Geese are regulated by the U.S. Fish and Wildlife Service under the guidelines set forth by the Migratory Bird Treaty Act of 1918 making it unlawful to kill, sell, hunt, disturb nests and eggs, or purchase and possess migratory birds unless permitted by the Secretary of the Interior. 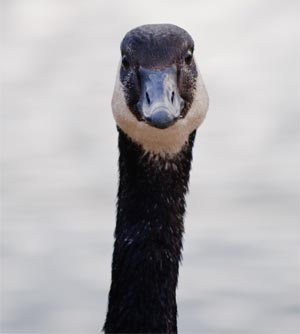 Current goose conflicts in urban and suburban settings are often caused by resident Canada Geese flocks and not migratory birds. During the 1930’s an ambitious effort was undertaken to reintroduce a resident population of geese throughout the Continental United States.

Many things have changed since the reestablishment of resident geese, particularly the use and development of our land resources. Creating open spaces with well manicured lawns, often dotted with ponds and lakes, and the lack of predators in these suburban settings creates an environment in which geese can thrive. Extensive food resources, excellent nesting areas, and security from predators are all that is needed to create a population explosion among resident Canada Geese.

Often these Geese feed in adjacent farmland creating a hardship to the land owner. Hunting access is often limited due to the proximity to human environments.

The U.S. Fish and Wildlife Service estimate the current (2002) national resident goose population at 3.5 million. At an average annual growth rate of 10%, within three years 1.1 million new geese will be added to the current population.

These unnatural conditions work to produce healthier and larger geese capable of laying larger nests and living much longer than their migratory cousins.

Why are you bothering the Geese?

We have been hired by your management company to help with the problems associated with the overpopulation of Canada Geese.

What will happen if we leave the geese alone?

Resident Canada geese are responsible for significant landscape damage, and can cause a major financial impact to property owners. The droppings are unsightly, and there is evidence that the bacteria can be harmful to water supplies, and unhealthy for humans. The Geese can become aggressive during the nesting and hatching season, and may expose property owners to civil litigation. The overpopulation of Geese has caused many jurisdictions to allow large scale “roundups” and euthanasia.

Will the techniques frighten the Geese?

Yes. The goal of a hazing program is to imprint fear of certain areas in the Geese.

I have heard that the Geese are protected, is this true?

Yes. Canada Geese are protected under the Federal Migratory Bird Treaty Act of 1918, and are ultimately regulated by The U.S. Fish And Wildlife Service. The Migratory bird act governs what measures can and cannot be used to control the population. Any work performed by Atlantic goose Management will conform to all of the rules under the treaty, and protocols set forth by The MSPCA and other animal advocacy groups.

If the birds are migratory, why are they here all year long?

There are two types of Geese in Massachusetts, resident and migratory. Resident Geese were released in the early 1920s from decoy flocks, and have never migrated. Resident Geese number over one million in the eastern states alone, and are increasing at 14% per annum. Resident Geese are usually responsible for the majority of complaints.

Can I help with the program?

The program should be administered and conducted only by trained professionals. You can however assist by insuring that you do not feed the geese.

You are working on the site, but I still see Geese, why?

In some cases, the Geese have been imprinted to an area for several years. In these areas, it may take many months, or even years to make a significant impact on the population.

Who can I contact if I need more information?

The following organizations can help